The current situation on the borders of Poland and Latvia, neighbours of Lukashenko’s Belarus, underscores the topicality of so-called « hybrid » wars. Ukraine, for its part, has long been exposed to threats and manoeuvring from the Kremlin, the « godfather » to the despotic leader of Belarus. In truth, Russia is waging a cold war across different fields, including through powerful economic and financial leverages. As it stands, the cost to Ukraine of recent Russian aggression is estimated to amount to at least 120 billion dollars (106 billion euros). Now, once again Russian military pressure is mounting on Ukraine. It is up to the West to shift away from the illusion of a « happy multipolarity » and to vigorously support Ukraine, the outpost of Europe.

The situation on the borders of Belarus’s neighbours Poland and Latvia, and Lukashenko’s use of migrants and refugees as a form of pressure, brings the « hybrid wars » that threaten Europe under sharp focus once again. Lately, the phrase has become more common. But Europe’s awakening is late to the party: Ukraine has been the victim of hybrid warfare for several years already. “A suspended war, » wrote Paul Valéry, « is a war postponed.” The forced reunification of Crimea with Russia in February 2014 and the outbreak of armed conflict in the Donbass region the following month are the events which caused the term « hybrid war » to flourish. In these two territories, which come under Ukrainian sovereignty, Russian forces, foregoing their insignia, were deployed and presented as the emanation of a spontaneous popular revolt against so-called “fascism”.

A « hybrid war » refers to an « undercover war »which uses proxy forces and troops whose affiliation is not clearly marked. This type of conflict combines traditional fighting in the field, destabilization operations and intimidation tactics (for example, the stationing of forces at the borders and threats of a massive intervention).

What’s more, this phantom war often relies on cyber-attacks and other propaganda activities in the digital world. This is what Russian strategists call the “information war”. These are in fact propaganda and disinformation campaigns, the effectiveness of which is multiplied by new communication technologies.

By operating in a grey area where perceptions are blurred, the aggressor aims to stay below the threshold that would result in a physical response, while accumulating tactical and strategic gains. The clandestine and irregular nature of the operations thus gives the aggressor the opportunity to deny the facts, in what specialists have coined “plausible deniability”.

Some argue that the concept of “hybrid warfare” lacks precision and clarity. When Russian Chief of Staff Valeri Guerassimov used this phrase in 2013, it was to refer to the rebellion allegedly being plotted by NATO against the Kremlin at the time. But we are well aware of how Russian leaders are accustomed to the practice of accusatory reversal: they readily attribute their own designs, practices and misdeeds to others.

The term “irregular warfare” is possibly most appropriate to describe this type of conflict. The fact is that the conflict is picking up pace. If the Kremlin were to trigger a new military offensive to push its forces into the Donbass or further into Ukraine, an outcome feared by many in the West, it would materialise as a full-blown war, with all that entails. And, beyond this, Western observers must bear in mind that Russian aggression against Ukraine goes far beyond military conflict and includes extremely disruptive economic and financial intimidation.

Evidently, depriving Ukraine of Crimea and a third of the Donbass, while hindering free navigation in the Sea of Azov, has important geostrategic consequences, not least the change in the balance of powers in the Black Sea, and the damage it has done to the status and reputation of the Ukrainian state. The human toll is also very significant: 14,000 reported dead, a tragic tally to which one must be added the wounded, widows and orphans, refugees and displaced persons.

In addition, the economic cost to Ukraine needs to be fully measured. Researchers have shown that due to the war, Ukraine’s per capita GDP declined by 15% on average over the years 2013 to 2017. Before the 2014 Ukrainian Revolution, the Donbas region accounted for 10% of national GDP, while Crimea represented close to 4%. Within a year, studies reported that war-related damages in the Donbas amounted to some 8% of Ukraine’s GDP – in the summer of 2014 alone, the region’s GDP plunged by 70%. The reconstruction costs in the Donbas alone were estimated to be 21 billion dollars, or 18,6 billion euros according to the Vienna Institute for International Economic Studies.

The total asset value of these territories amounts to nearly 100 billion dollars, or 87 billion euros according to an Atlantic Council study published in 2018. Considering the material destruction (of infrastructure, mostly), the asset seizures, the impact on volumes of foreign direct investments into Ukraine, and the opportunity costs of the past seven years, many experts expect the real losses to be far higher. It is estimated that the total cost to Ukraine could amount to at least 120 billion dollars, or 106 billion euros, possibly more.

In the coming years, this number could rise significantly if there is further damage to Ukraine’s economy, including by the « Putin Bridge » over the Kerch Strait, set to further undercut Ukraine’s revenue on its Azov ports, and by the loss of 3 billion dollars, or 2.6 billion euros, in annual gas transit fees – 3% of the country’s annual GDP – as a result of Turkstream and Nord Stream II.

Geopolitics of the pipelines

Finally, the energy issue, and in particular the impact of Nord Stream II, must be considered. We know that the country is comparable to an “energy bridge” between Russia and Europe, with more than two-fifths of Russian gas to be used in Europe passing through Ukraine (this was closer to 80% in the 1990s).

For a time, it was a guaranteed income for Ukraine which, in addition to royalties and guarantees for its national supply, had a strong strategic value in the eyes of European importing countries. Thus a Russo-Ukrainian crisis would have rapidly taken on a pan-European dimension. Dependence on the Ukrainian “energy bridge” forced the Kremlin to hold back.

Resulting from the political tandem between Vladimir Putin and Gerhard Schröder, then German Chancellor, Nord Stream I initially reduced the importance of Ukraine in the transit of Russian gas as soon as it began operations in 2010, however Ukraine’s role was not drastically compromised. But in 2014, when Russia launched their “irregular war” against Ukraine, the West could not claim that this conflict was nothing more than a quarrel within the « post-Soviet space », without wider repercussions.

With the construction of the Turkstream and Nord Stream II pipelines, almost all of Europe’s Russian gas supply could soon bypass Ukraine entirely. Other countries in central and eastern Europe are equally concerned about this.

Angela Merkel’s position has remained consistent: she has consistently repeated that this is nothing more than a commercial matter: a direct and more secure link to ensure access to Russian gas at a lower cost. Gazprom CEO Alexei Millier explained to Western diplomats that his company is not obliged to support the Ukrainians. Behind all of this Vladimir Putin is pulling the strings, exploiting the current European energy crisis, made worse by him, to justify the need for Nord Stream II again and again, insisting that it be operational as soon as possible.

Contrary to these assertions, Nord Stream II, reinforced in the south by Turkstream, is part of a fully-fledged geopolitical strategy. For Moscow, it achieves two intermediate objectives. On the one hand, to impoverish and therefore weaken Ukraine by depriving the country of gas transit fees. On the other hand, to deny Ukraine its strategic value in the hope that the West will tire of supporting it, which would leave Russia free to act.

Contrary to what is being peddled by some in France, the end result would not be entirely negative for Europe, as it would accelerate the geopolitical turnaround of Ukraine towards the West, which would result in its attachment in one form or another to the EU and NATO. The Kremlin still believes that a land that was once ruled by Russia must inexorably return to it. Even more so in the case of Ukraine, since Putin and his people consider that the legacy of the Kievan Rus’ is in Moscow.

In other words, Russia’s leaders intend to recover all or part of Ukrainian territory, the capture of Crimea being only a first step. Their enterprise of subversion of the Ukrainian sovereign state is long-lasting, punctuated both by the opportunities offered by international political life and the tactical motives of Moscow which uses Ukraine to test Westerners’ resolve. There should be no doubt that the worsening situation in the Taiwan Strait, at the other end of Eurasia, would be taken advantage of by Putin. Moscow and Beijing already support each other in their determination to disrupt and undermine.

In short, the situation in Ukraine sums up the challenges the West is facing: the will of revisionist and disruptive powers to upset the international order, their appetite for conflicts which open up the prospect of strategic gains and the threat of escalation. In truth, the term « hybrid war » does not go far enough: it does not sufficiently capture the risk of high intensity wars. It is a new cold war that it is about, with its own characteristics. See Clausewitz: war is a “chameleon”; this is also true in the case of a cold war.

In their dream of “happy multipolarity” and hypnotised by “the power of the norm”, against a backdrop of universal economic development, European leaders have been slower than their American counterparts to recognise this. The US is more directly in touch with the manoeuvring at play behind international crises, and the underlying manipulation of power dynamics.

It is therefore essential to reaffirm Western support for Ukraine, legally, militarily, and in the financial and economic spheres as well. This requires statements and concrete actions. The future prosperity of Ukraine depends on a solid Eastern barrier, which is a sine qua non condition for real peace with a “Russia-Eurasia” that must give up its revisionist ambitions in Europe. Conversely, a permissive attitude would encourage Vladimir Putin in his push towards the west. 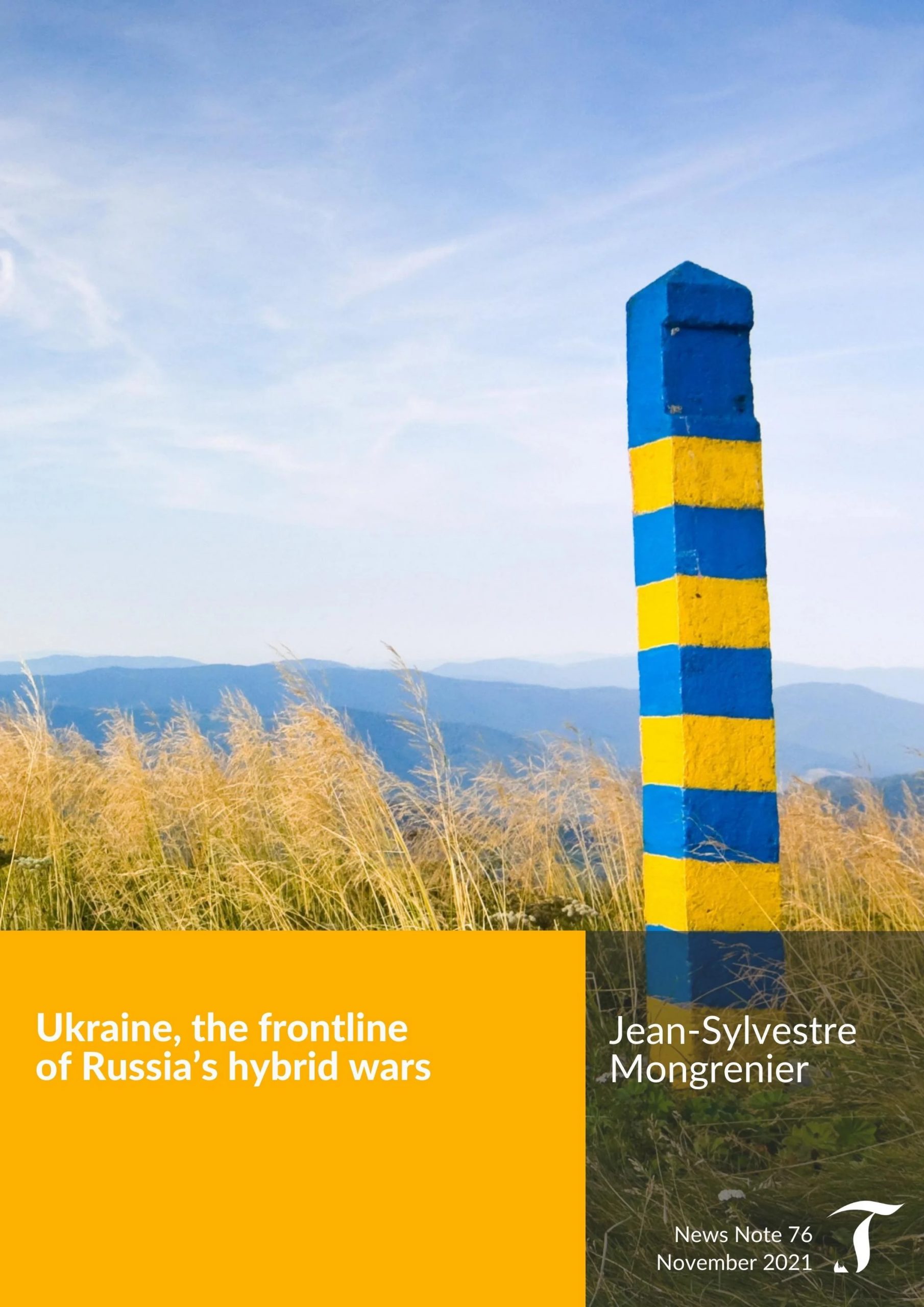