Once again, the Pacific islands have become focal points for the major powers

The growing involvement of the People’s Republic of China (PRC) in the region and its ambition to gain a lasting foothold are shifting the geopolitical balance and challenging the “Pax Americana” that has endured in the Pacific in the wake of the Second World War and subsequent decolonisation. However, as the PRC is well aware, despite the strength of its weapons and in particular its navy, it is still not in a position to challenge the armed forces of the US and its allies and partners. Mastering the long-term approach, it has earmarked 2049 for the political objective of the “Chinese Dream” and 2035 for achieving the strategic target of having first-rate armed forces at its disposal. The PRC ploughs forward by exerting influence in all its forms on states and territories, gradually building a presence wherever it can, while never backing down. France and Taiwan are specifically singled out, the former because its territories are of strong geostrategic interest, the latter for both political domestic and geostrategic reasons. This report aims not only to understand the geopolitics of the Pacific islands and territories and the geostrategy of the United States and its allies for the region, but also to shed light on how China pursues its influence-building efforts, using Joseph Nye’s well-known hard power and soft power categories.

Geopolitics of the Pacific islands and territories

The Pacific is the world’s largest ocean It encompasses many islands and atolls, mainly grouped into fourteen island states, two French “collectivités d’outre-mer” (overseas collectivities), Australia, New Zealand and states with ties to the United States. Some of these are micro-states that are very vulnerable to the PRC’s influence. France retains territorial possessions in the Pacific – New Caledonia, French Polynesia, the Wallis and Futuna Islands and Clipperton– making it a Pacific Rim state with more maritime space than any other state in the Pacific. As the only EU member state with an active presence in the area, France maintains a permanent military presence, albeit insufficient for the challenges it faces. Most of the islands north of the equator are under the authority of the United States of America, which has established a chain of major bases linking the North American continent to Japan via Hawaii and Guam. 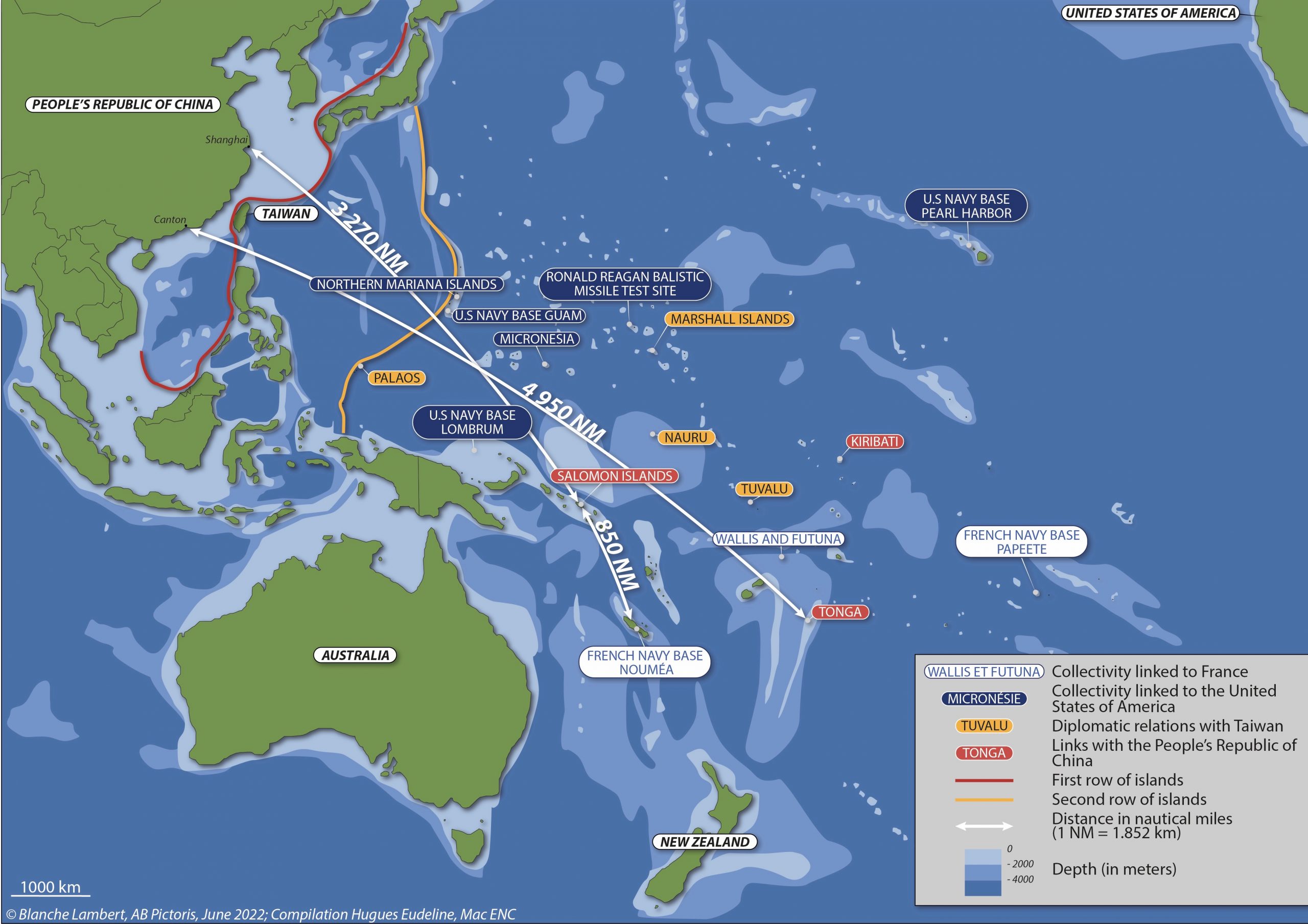 The regional geostrategy of the United States and its allies

During the Second World War, the Japanese Empire and the United States carefully planned their offensives and identified the most appropriate locations to provide support to their forces as they moved forward. Their choices remain justified. Leaving aside states linked the United States, the most likely states and territories to be targeted by China to establish bases are Papua New Guinea, the Solomon Islands, and New Caledonia and French Polynesia. In the wake of the Pacific War, the United States formed close military alliances with four Pacific Rim powers: Thailand, Japan, the Republic of Korea and Australia. The White House, which released its new Indo-Pacific strategy in February 2022, has also strengthened ties with Anglosphere countries and powers that feel threatened by the PRC. This led to Australia breaking off its confidence-building partnership with France in September 2021 and to a rethinking of the two nations’ strategic alliance. This places France in a dangerously isolated geostrategic position, given that the situation in New Caledonia is crucial for its Indo-Pacific agenda, but also for its geopolitical weight on the world stage.

China’s hard power in the Pacific

From a military perspective, China’s activities in the Pacific are limited. They focus mainly on humanitarian aid, observation and patrol work. This reflects the fact that China’s strategic priority is to break through the first chain of islands, including control of the South China Sea and the East China Sea. Beijing is not in a position to operate within, nor beyond, the second chain of islands. However, the frequent appearance of Chinese warships shows that Beijing is attaching increasing importance to high seas presence and training in the Pacific. Economically, China exerts its influence mainly by fostering asymmetrical relations, through the Belt and Road Initiative and by offering aid. The asymmetry between input costs and strategic profits means that China’s economic involvement in the region should not be underestimated. Beijing’s asymmetrical economic relations allow it to defend its « core interests ». The Belt and Road Initiative and the aid granted have allowed it to gain a foothold in the Pacific.

China’s soft power in the Pacific

In 2013, President Xi Jinping coined the phrase “telling China’s story well” as a propaganda concept. By contributing aid and facilitating trade, China seeks to convey three main narratives in the Pacific: (1) China spearheads the community of common destiny for mankind, (2) China is a partner in the struggle against colonialism and (3) China is the protector of the Chinese diaspora. Beijing aspires to enhance its attractiveness and to pursue the “domination of minds” which it uses to shape a favourable security environment and to strengthen strategic coordination and mutual support with the Pacific islands. As a result, China currently has the support of many Pacific countries. They perceive Beijing as a partner that shares both their suffering and their joy, allowing the PRC to make significant diplomatic progress. This is illustrated by the gradual ousting of Taiwan from the diplomatic battlefield and the forging of a coalition against the interference of Western powers in the region.

China is interested in acquiring a strategic area east of the first line of islands demarcating the China Sea and the Sea of Japan. This would provide free access to the world’s oceans, essential for the flow of the PRC’s seaborne trade. However, its military power imbalance prevents China from directly confronting the US in the Pacific. The recent experience of war between Russia and Ukraine has also increased China’s caution about retaking Taiwan by military means. Consequently, Beijing has been exercising a more subtle approach in terms of its activities in the Pacific. In the face of US dominance, China’s record in the hard power realm is limited (although this is beginning to change), but Beijing has directed its vast resources (military and economic) to the soft power realm, and its efforts have now yielded increasing gains, thus bolstering China’s future dominance in the region. Against this background, the conclusion proposes ten recommendations (three for all countries who give importance to liberty, three for France and four for Taiwan) to tackle China’s strategy. 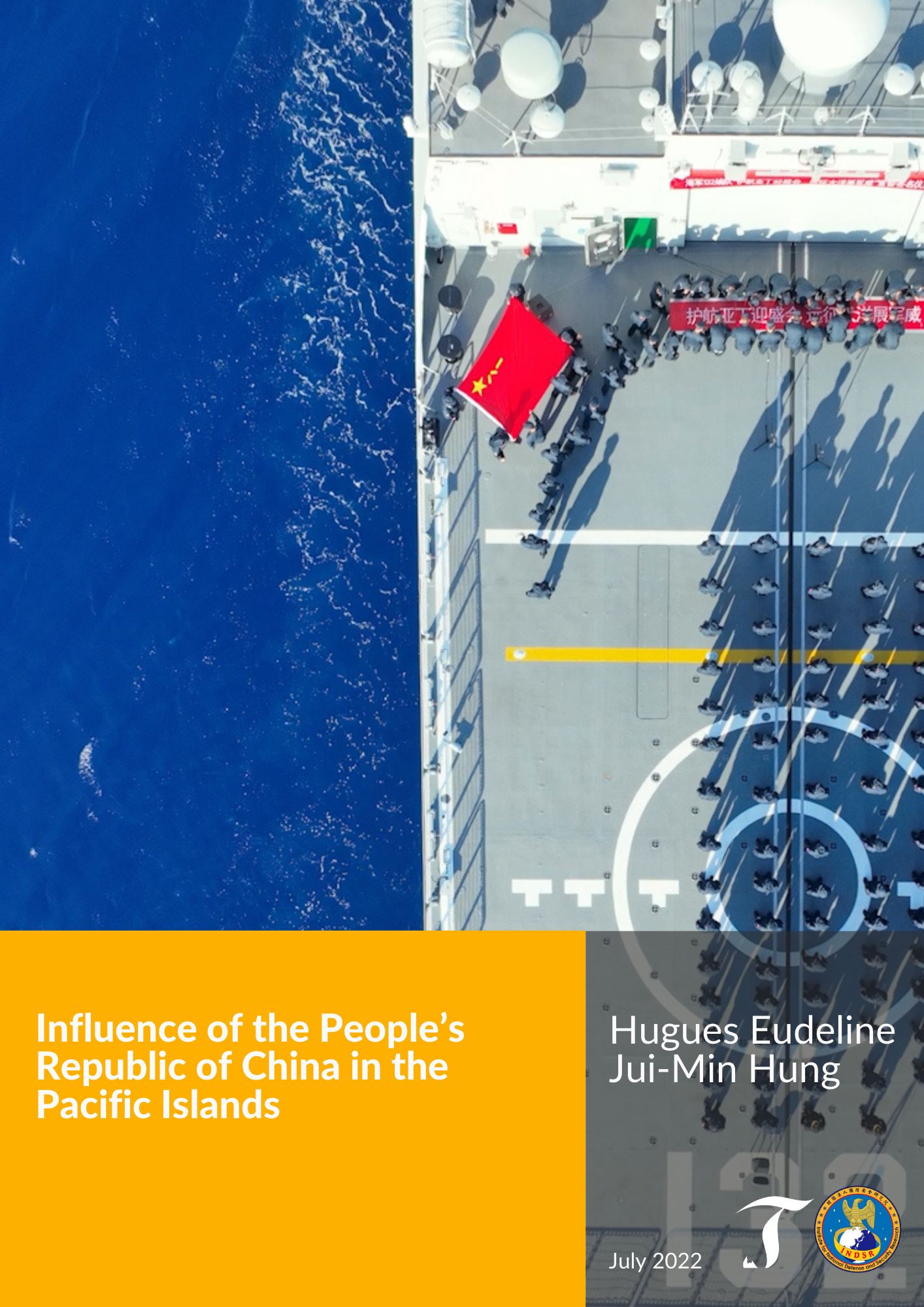